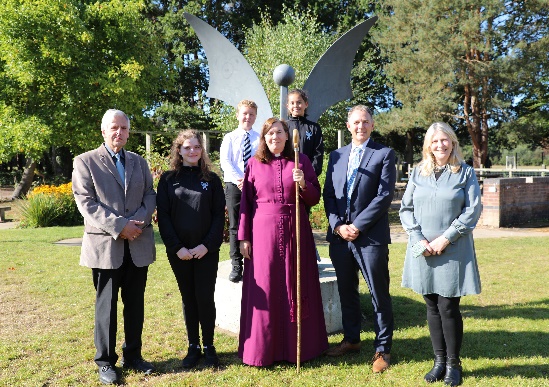 On the first, Karen Gorham, Bishop of Sherborne and acting Bishop of Salisbury, and Rev Suzanne Pattle from St Michael’s Church, paid a visit.

The bishop addressed the whole school who were on the sports field in the
shape of a giant ‘50’.

On the second, the three surviving former headmasters were among more than 300 ex-pupils and staff members who attended to reminisce.

They were entertained by the wonderfully successful St Michael’s Orchestra and Jazz Band under the direction of Ed Johnston, the school's music teacher.

Andrew Jones, the deputy head when the school opened in 1971 and who was representing the first headmaster, the late Martin Neeve, said: “St Michael’s is a special place.

“It is built on Christian values that keeps pupils at the heart of what it does and still provides the same excellent service as the independent sector.” 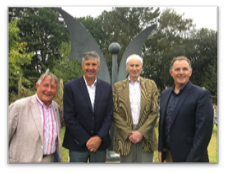 In his speech to former staff and pupils he lamented how middle schools had been lost to so many other areas of the country.

Former heads Malcolm Chisholm and Paul Nation recalled with fondness the special relationships formed at the school, and how these had spurred on so many ex-pupils and staff.

Current headmaster Ron Jenkinson said: “The celebration was a powerful reminder of how the core values have lasted through the generations.

“It was a joy to see how impressed the former students were with the facilities and the wonderful Year 8 students showed them around.

“The current students certainly showed that the future is very bright for St Michael's Middle School's next 50 years.

“We are determined to use this anniversary as an opportunity to look forward and so, working with Colehill Parish Council, are planting 603 trees, one for every child at the school, as well as looking at a regeneration project for the Triangle Wood in Colehill.”

The school is still collecting information from former students and staff and hopes to produce a book detailing how, in all walks of life, ‘people have taken forward the core values of aspiration, belief and creativity’.

To send any information through use this email address: smmsfocus50@gmail.com