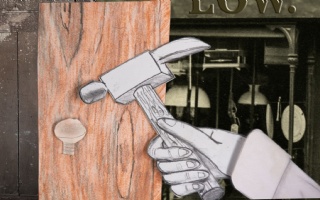 Pupils at St Michael's Middle School have had the exciting opportunity to bring a little bit of Wimborne history to life. The school were approached having previously worked with Wimborne Community Theatre, Priests House Museum and Alistair Nisbett from Screen Play. This time the team were also joined by the award winning Nic Rawlings from Paper Cinema.

To my love: students’ twist on Valentine card drama

The Victorian drama of a Valentine card shop boarded up for 30 years has been brought to life in extraordinary animated form by a group of school students in Wimborne.

Pupils from St Michael’s Middle School have made both screen-based and Victorian zoetrope animations to tell the story of John Low’s Valentine card shop and how it went on to become an award winning museum.

Working with artists Nic Rawling, Alastair Nisbet and Hannah Small, the 12 and 13 year old students have recreated the story of John Low whose boarded up shop became a time capsule - and its contents a nationally important collection.

They have drawn and voiced the main characters, John Low and museum founder Hilda Coles, brought the museum’s mummified cat to life and animated a Victorian lady writing “to my love” on an 1860s Valentine.

Alastair Nisbet, animator and producer from arts organisation ScreenPLAY explained: “Nic who performs internationally with the Paper Cinema makes a unique type of live animation so as well as drawing and voicing the characters in traditional film sequences, the group have worked with him to make four Victorian style zoetrope animations.”

The zoetropes and films will form an installation for the play Echoes of the Past by Wimborne Community Theatre in the Priests House Museum next month, celebrating the start of a £1.6million re-design of the museum, given to the town as a centre for culture and education nearly 60 years ago.

Ron Jenkinson, Headteacher at St Michaels said the artists’ mini residency had given students a taste of life in the creative industries. “They have drawn, storyboarded, voice recorded, filmed and above all worked together as a team to make some beautiful work for a real world project and that’s been a great experience for them.